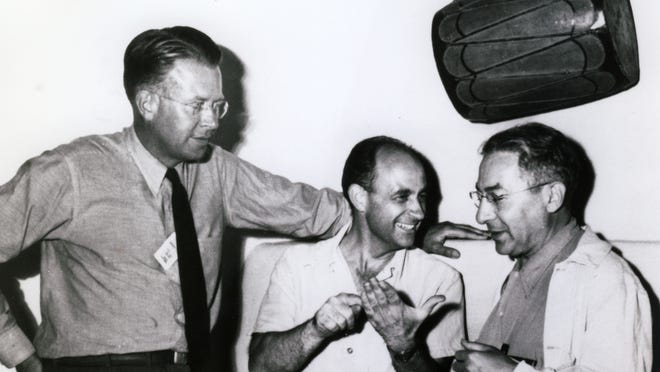 Early in the morning of July 16, 1945, native El Pasoan Barbara Kent was thrown out of her bunk bed at dance camp.

Just 13 years of age, she had traveled to Ruidoso, New Mexico, to learn ballet, unwittingly only a short distance from the site of the first nuclear weapons test. After the explosion awakened her, she says the camp owner came running in to tell the young girls to head outside, where the sky had turned from dark to blindingly bright.

Barbara Kent describes playing in pleasantly warm snow improbably falling in July, grabbing it in her hands and rubbing it on her face. Decades later, she realized that this “snow” had been radioactive fallout from the atomic blast. Today, she is the only survivor from the camp – all the other girls passed away from cancers before the age of 30.

El Paso is less than 150 miles from the epicenter of the nuclear bomb detonation known as the Trinity Test. While Kent happened to be in New Mexico that day, she was not the only Texan exposed to dangerous radiation levels. According to U.S. Census data, between 100,000-130,000 people lived in El Paso during the blast. Nuclear fallout from the explosion settled over thousands of square miles and exposed locals to radiation levels 10,000 times higher than what is currently allowed.

Unfortunately, many of our state’s lawmakers in Congress do not see radiation exposure as a Texas issue. They have not treated the problem with the urgency it is due. It’s time to acknowledge this historical wrong and compensate Texans and New Mexicans suffering from life-threatening illnesses due to nuclear weapons activities.

Congress has united in compensating nuclear testing survivors in the past. In 1990, Utah Senator Orrin Hatch introduced the Radiation Exposure Compensation Act (RECA), which received strong bipartisan support and was signed into law by President George H.W. Bush. Unless Congress acts, this compensation program is set to expire in July 2022. Making matters worse, Texas and New Mexico “downwinders” – locals exposed to nuclear fallout – have never been eligible.

Last month, communities affected by nuclear testing celebrated when the RECA Amendments Act of 2021 was overwhelmingly approved by the House Judiciary Committee. If passed into law, this bill will extend RECA by 19 years and allow New Mexican downwinders to claim compensation for the first time. Importantly, Texan downwinders just across the border are also pushing to be included.

Texas is currently covered in RECA as a uranium mining state that supplied material for America’s nuclear weapons arsenal. Uranium workers employed before 1971 who have developed radiation-related illnesses are eligible to receive a one-time RECA payment of $150,000. Many industry workers came from low-income Native and Hispanic communities and were never informed of deadly radiation exposure.

Greg Harman writes that “after 30 years of heavy [uranium] mining activity, cancer rates in Navajo Country began to shoot upward, doubling by the late ’90s.” RECA does not compensate post-1971 uranium miners, even though mining (and cancer cases) continued past this cutoff date. Texas contained the country’s third-largest uranium reserves and ranked second in the nation in drilling for uranium in 1971. As a result, many Texan uranium miners stand to benefit from the RECA extension, which expands eligibility to include workers in the industry post-1971.

We scored another victory when El Paso’s Congresswomen Veronica Escobar recently cosponsored the RECA Amendments Act. Now it’s time for Senators John Cornyn and Ted Cruz to cosponsor and endorse the Senate version. This bill ensures that compensation for Texan uranium miners will not expire this summer. Advocates from local groups like the Tularosa Basin Downwinders Consortium ask legislators to amend the bill’s language to include El Paso County.

Nuclear fallout does not respect state lines or dates on the calendar. Perhaps, in this case, neither should Congress. It is long past time to compensate Texans, New Mexicans, and downwinders of the 1945 Trinity Tests.

Lon Burnam is a former member of the Texas House of Representatives, where he served for 18 years representing District 90. He has been involved for many decades with nuclear weapons and nuclear waste issues.

← Texas is one step closer to housing tons of nuclear waste. What that means for DFW
Texas ‘downwinders’ should be eligible for nuclear radiation compensation, advocates say →