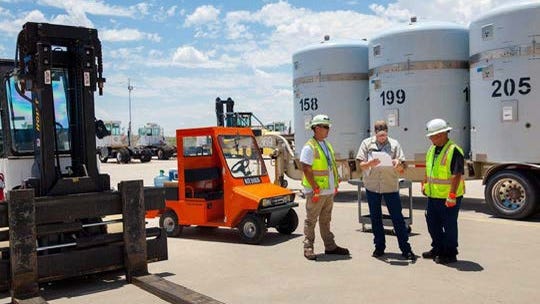 A plan to dispose of surplus plutonium at the Waste Isolation Pilot Plant through a dilution process that would reduce the waste to radiation levels allowable at the facility moved forward at the end of 2020 and the process was expected to continue through 2022.

The National Nuclear Security Administration (NNSA) – an arm of the U.S. Department of Energy – announced in December its intention to draft an environmental impact statement on the project and a public comment scoping was extended until Feb. 18 (see below).

Two sample comment letters are available for your use courtesy of Concerned Citizens for Nuclear Safety:  a one-pager is available is HERE and a longer one is available HERE.

Comments on the project can be made to the NNSA via email to SPDP-EIS@NNSA.DOE.GOV with the subject line SPDP EIS Scoping Comment.

Under the agency’s preferred method, pit plutonium would be shipped from Pantex to Los Alamos National Laboratory in New Mexico to be prepared for dilution, then to Savannah River Site in South Carolina where it will be diluted before final shipment back to New Mexico to WIPP in southeast New Mexico.

The EIS will study the scope of the project and its potential impacts on the environment and DOE operations at numerous sites involved in the storage, down-blending and final disposal of the plutonium.

In total, the NNSA hopes to dispose of about 34 metric tons of the waste now stored at the Pantex Plant in northern Texas and Savannah River site in South Carolina.

Under the agency’s preferred method, pit plutonium would be shipped from Pantex to Los Alamos National Laboratory in New Mexico to be prepared for dilution, then to Savannah River Site in South Carolina where it will be diluted before final shipment back to New Mexico to WIPP in southeast New Mexico.

Other plutonium currently at Savannah River site would be down-blended at the site and shipped to WIPP.

By the time the plutonium is down-blended, it will fit WIPP’s waste acceptance criteria for low-level transuranic (TRU) waste.

TRU waste is radiated materials such as clothing and equipment used during nuclear research and other activities. WIPP is the only repository for TRU waste in the U.S.

In 2016, the DOE elected to dispose of about 6 MT of similar waste using the dilute and dispose method not included in the 34 MT from the current project.

The project would include 7.1 MT the DOE chose to dilute and dispose of last year at WIPP.

To complete the project, the DOE would need to modify facilities at Pantex, Los Alamos, Savannah River Site and WIPP.

Previously, the NNSA planned to dispose of the waste by making it into mixed oxide (MOX) fuel, but that program was halted and the MOX Fuel Fabrication Facility at Savannah River was repurposed.

In 2018, the National Academies of Science releases a report commissioned by the DOE that raised concerns about WIPP’s capacity to hold the waste.

The report said WIPP must be expended to add space to hold the 34 MT of down-blended plutonium. Emplacement of plutonium was expected, per the report, to begin in 2024, and end in 2049, with the program lasting “more than” 30 years.

Another necessity, read the report, is approval from the Russian Federation under the Plutonium Management and Disposal Agreement (PMDA) reached by the U.S. and Russia in 2000 to regulate the dilution of plutonium for disposal or conversion into mixed-oxide (MOX) fuel for electricity.

Clements said he supported the immobilization of plutonium since the DOE began assessing disposition paths in 1995 that would have treated it as waste more than 25 years ago.

Since then, he said the DOE made a “costly mistake” in pursuing the MOX method which never came to fruition.

“From the start of the plutonium disposition efforts, I supported immobilization of plutonium as waste,” Clements wrote.

“It was a colossal and costly mistake on DOE’s part to terminate that effort, influenced by self-serving, pro-MOX forces inside and outside the DOE, underscoring wisdom on the matter at hand was with public interest groups that supported immobilization and that opposed the MOX boondoggle.”

He said two programmatic environmental impact statements (PEIS) are needed in addition to the EIS: one to analyze the project’s potential impact on all DOE plutonium pit production sites and second to study the potential of a second TRU waste disposal site if the dilute-and-dispose method led to a surpassing of WIPP’s capacity.

“Given WIPP volume pressures, plans for a second TRU waste repository must be considered in the draft EIS,” Clements wrote.

Don Hancock, nuclear waste program director at the Southwest Research and Information Center in Albuquerque said the project would represent an expansion of both the purpose of WIPP and its capacity to hold waste.

He said such decisions were outside of WIPP’s permitting and that a new repository must be considered in the future.

“Congress and the government need to start a serious conversation about what we’re going to do in 50 years if WIPP is still the only repository,” Hancock said. “If we’re going to say everything is going to WIPP, that’s a different discussion. Everything can’t come to WIPP.”

Adrian Hedden can be reached at 575-628-5516, achedden@currentargus.com or @AdrianHedden on Twitter. 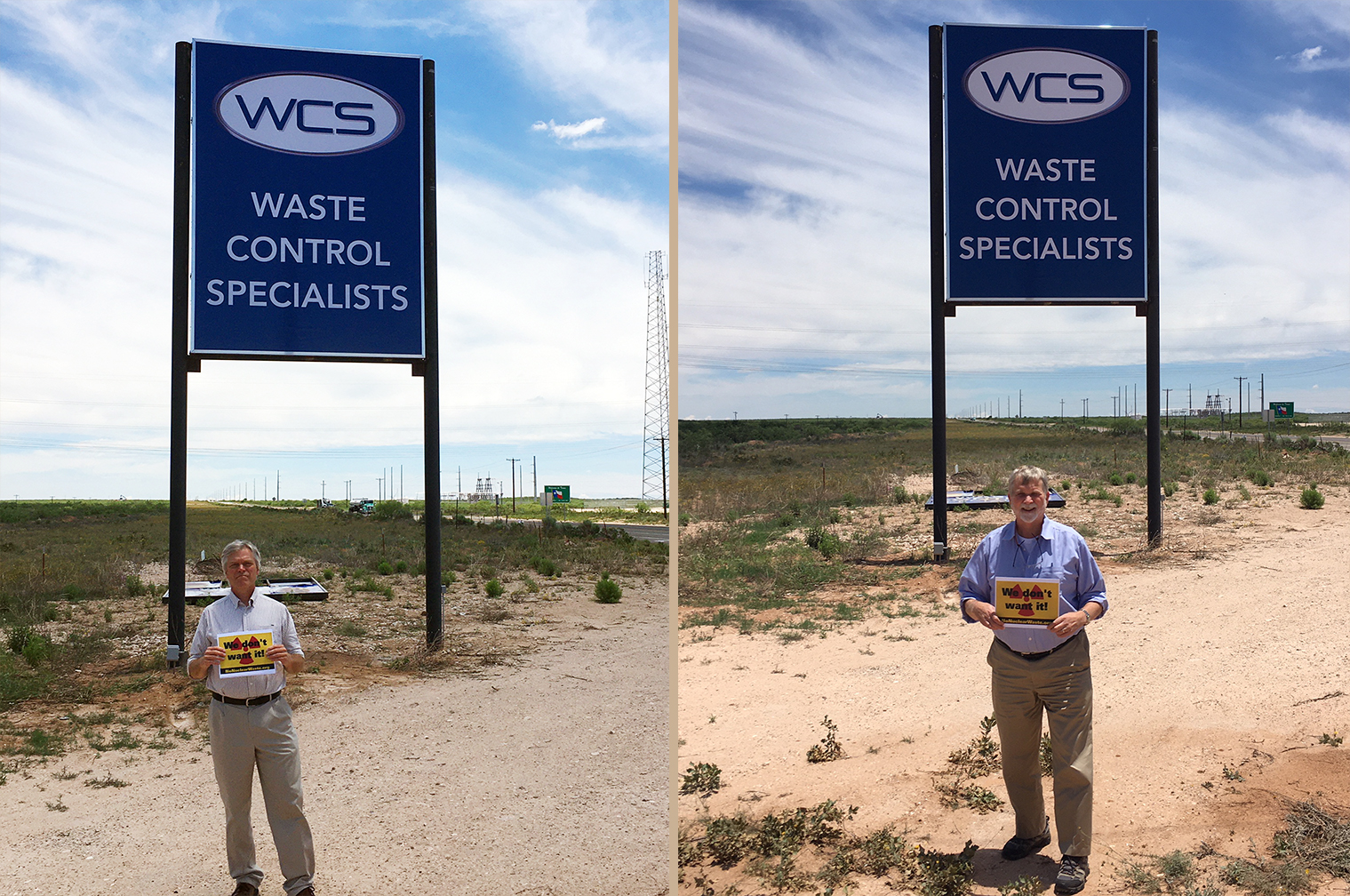 Kevin Kamps of Beyond Nuclear (left) and Lon Burnam, Peace Farm board member (right), protesting the dangerous nuclear waste dump planned for Andrews, Texas, as well as one planned for New Mexico.

Dumping nuclear waste on the Southwest region would be massive environmental injustice.

Millions of people who live near ports and railroad tracks across the country would also be put at risk from leaks, accidents, or sabotage from irradiated fuels rods. Exposure to radiation leads to cancers, birth defects, and death. Help protect your neighbors and communities nationwide. Prevent radioactive contamination by telling the Nuclear Regulatory Commission to halt the high-level radioactive waste storage licensing applications immediately. 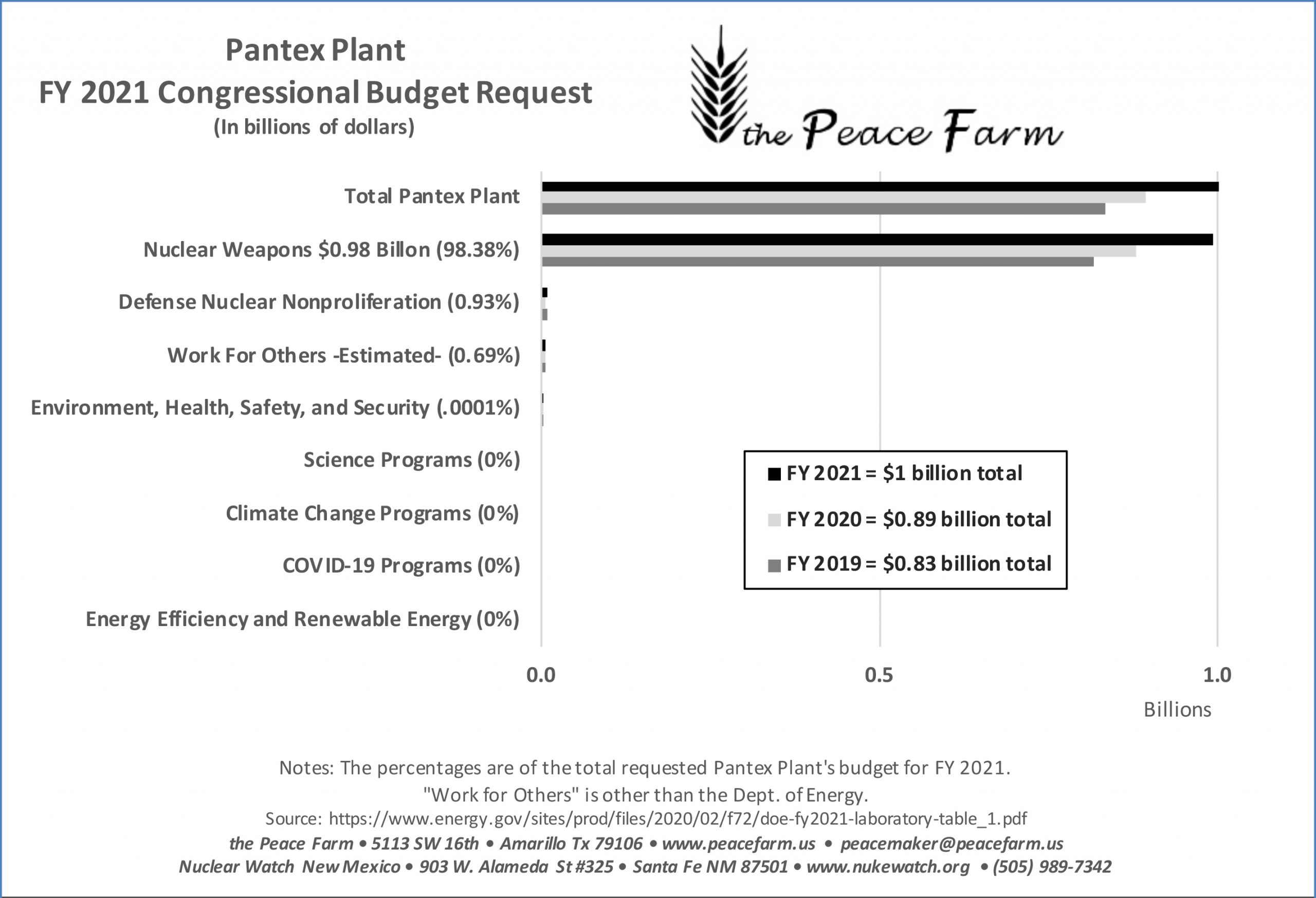